The Way We Think


I have spent the last week reviewing for a critical exam I will be taking for 2 weekends. This exam will determine if I can move on with my masteral degree and it means having to go back and review all the courses I have taken. One of the things I had to relearn was Cognitive Psychology. Cognitive Psychology is basically the study of how we think. I had to study the way we perceive things, how we pay attention, memory, thinking, making decisions, creativity, etc. The more I learn of the intricacies of our mind the more convinced I am that this can’t be an accident. The mere act of seeing and recognizing something involves so many processes that the fact that we are able to do it at all is nothing short of a Miracle!


One of my favorite songs from a musical is this little-known song called A Hundred Million Miracles from the musical Flower Drum Song. The song goes:


The song talks about the multitude of miracles we encounter every day should we only notice them. The mere fact that our planet balances perfectly due to the pull of the planets and the gravity of the sun is already an inexplicable wonder, and that is just one of a million miracles we can point out. The song brings to light an important fact, these miracles are everywhere, they are happening! However, not everyone perceives them because, as the song suggests those who don’t agree that there are miracles are those who fail to hear or see those miracles.

But, you may ask, how can one not see things if they are so miraculous? Aren’t we sure to see something if it were indeed miraculous? You know the answer to that? It’s because we have stopped looking! We perceive things when we are looking at them and we shut out everything else! This is an
interesting phenomenon in Cognitive Psychology called inattention blindness. Inattention blindness is this phenomenon where people fail to see things that they are not paying attention to. One experiment that showcases this phenomenon is the Gorilla experiment. Participants were asked to watch a video where the actors were busy with Basketball drills, the participants were then given the task of watching the video closely and counting the number of times the basketball was passed from one member to another. Unbeknownst to the participants who were watching the video, there is also a man in a gorilla costume that will be appearing and dancing around all over the basketball court as the people were busy performing basketball drills. At the end of the experiment none of the participants reported seeing the dancing gorilla. NOT ONE! How can nobody notice a dancing gorilla wearing a basketball uniform? Because, as with miracles, no one was looking! We have become so caught up, so focused on our lives that we are desensitized and fail to perceive the wonders and miracles all around us! 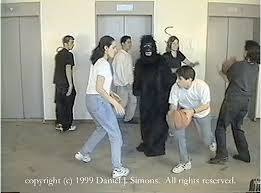 
I don’t know exactly when my focus started shifting from my child-like wonder to the jaded adults’ mindset. But I realized that I have become a bitter and jaded person when I was an adult and finding it difficult to find happiness in anything. I look at old blog posts from when I was still a food blogger and see someone so full of dissatisfaction! I had complaints about practically every restaurant, every meal and I felt justified in my point-of-view. I was spoiled. I wanted things a certain way and was extremely unhappy when I didn’t get what I expected. And I expected a lot! I felt entitled to things, I deserved it after all…or so I thought. My focus was in acquiring more but when I did get what I thought wanted, I was still unhappy.


Thank goodness for the blessing of motherhood. There’s something about being a mom that forces you to focus on the ordinary, the mundane, the day-to-day and see it all from the point-of-view of a child. When you're a mom you have to realize the beauty and wonder in a spider web. You get the blessing of seeing things again like you did the first time you saw them. You then start experiencing things with wonder and you start seeing the miracle in the day-to-day.

There are times though, that motherhood itself is the thing that keeps us from seeing the miracles. How can you appreciate the glorious things around you when you are covered in projectile vomit and poop? I realized though that as a mom I have to be the thermostat and not a thermometer in our home. I have to set the tone and make sure that my child can see and appreciate and therefore experience the hundred million miracles around her.

There are things I try to do at home that help me with my goal of creating a mindset of miracle in my child. I will share them in my next post. =)
Posted by Liv Reyes at 5:14 AM

Thank you for visiting my personal blog. I'm excited to share with you my journey in life as a woman, wife, parent and a professional. I hope we can learn from each other as you leave comments down below.

What have we been talking about?